Little Bunny is very naughty. He tries to be good, but he can't. He doesn't get up early in the morning. He doesn't want to drink milk for breakfast. He doesn't like to help his mother.

One day his father says, "Try to be a good little Bunny and I'll bring you a pretty ball." Then he goes to the big town.

Bunny goes to his room. He takes a red pencil and begins to draw funny pictures on the wall.

- Oh, naughty Bunny, go out and play in the yard! - says his mother.

There, in the yard Bunny meets his friend Willy. They jump and run together. Naughty Bunny kicks Willy. He bites Willy. He takes his toys. He pushes him into a puddle. Willy goes home crying. 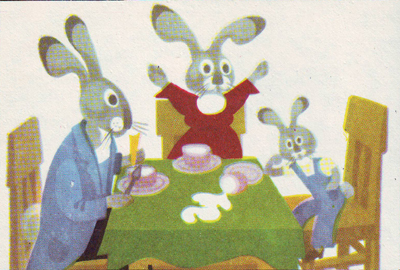 In the afternoon Bunny goes to the yard again. He runs after the hens and the chickens. He kicks the rooster.

- Oh, naughty Buny! - says mother. She is very sad. Bunny loves his mother and he doesn't like to see her sad.

On the next day little Bunny tries to be very good.

He gets up early in the morning.

He drinks his milk.

He plays nicely with Willy.

He doesn't draw pictures on the wall.

He doesn't run after the hens and the chickens.

He doesn't kick the rooster.

Mother is very happy. She hugs him, she kisses him and she gives him a big carrot. 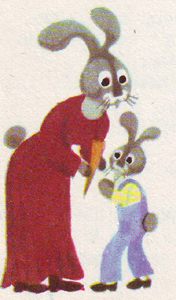