The lion inhabits the savanna. In the past he could have been met all across of Afrika. Today he has become extinct from the north lands of the continent and we can barely see him in the west regions of Afrika. The only places where we can see plenty of lions are Kenya and Tanzania. About 190 lions live in the forest Gir in India, south from Bombay.

The lion is one of the biggest and strongest predators. His body lenght is about 3,25 - 3,75 meters, including the tail. The height within the shoulders is about 0.9 - 1.1 meters. His weight reaches 200 to 275 kg. The duration of his life is from 15 to 20 years. The maximum velocity, which he can achieve while chasing a prey is 60km/h.

The male has a golden mane. His tail ends with furry "ball". The strong and sharp claws of lions can be both hidden and shown, depending on whether they need them, like in the rest of the cat family.

Those predators live in groups, which consist of females, little lions up to 2 years old and a male leader. Every group extends from 10 to 25 km, and the leader takes care of their territory by marking it or by powerful roar. On this territory other lions are not allowed. In the hottest hours of the day, a lion usually takes a rest close to a water pool or under the shadow of a tree or clif. Sometimes they even rest on a bough of a tree. The lion sleeps 12 hours a day.

How do lions hunt? » 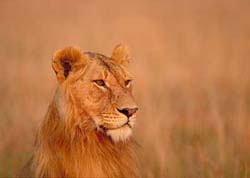