Each three years on average, after an 18-month pregnancy the female rhinoceros gives birth to only one young. It weighs about 30 to 40 kilograms and only 10 minutes after it appears it can already stand upright, a couple of hours later it begins to suck. It sucks from its mother during 18 months, but it also begins to graze long before it stops sucking. The young has no horn, it is unprotected and depends entirely on its mother. The mother protects the young carefully from each predator. From time to time the young stays with its mother even after the birth of the second young, although at the age of three years the young rhinoceros is already able to take care of itself alone.

« What does Rhinoceros eat? 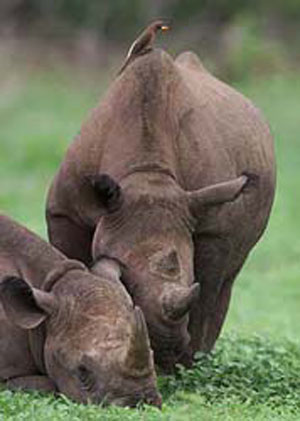