The African double-horned rhinoceros is a big and strong mammal. It is also called black rhinoceros and can be seen in East Africa.

It is a skillful clumsy. In spite of its clumsiness the black rhinoceros shows great agility. It can momentarily turn to the opposite direction, to run at trot or gallop.

The rhinoceros is a large animal which has strong and rough body up to five metres long and two metres high, and weighs up to two tons. Its prolonged head, its ears are larger than the ears of the white rhinoceros and also are fluffy-haired. The black rhinoceros has two horns (those of the females are larger and finer) that are located one after the other and have been formed by the epidermis. The front horn is up to one metre long, while the back one is considerably shorter. Their legs look like posts are short and podgy and have three toes with hooves at the ends, the middle one of which is stronger developed. Their neck is short, the tail is well-haired at the top. The body of a rhinoceros is covered with thick skin which is almost deprived of hairs.

Despite their names, the white and black rhinoceres do not differ in their colour. They both have grey skin. The name of the white rhinoceros is due to the deformation of the Dutch word "wide" which means "wide" and which in English has become "whitå".

The black rhinoceros has weak sight, but its sense of smell is very good, and the hearing is acute. Its reactions are unpredictable. When there is something suspicious, it can move away or on the contrary - to furiously attack. This is where its "furious animal" fame originates from.

The animal spends the hot period of the day under the shade of the trees. It leaves the birds land on its back and clean from parasites. By their flying off they warn the animal of coming danger. Such birds are mainly the larvae eaters - birds that are kindred with the starlings. The little white heron is also used to the neighborhood of the large mammal, but it can be seen only near swamps.

The rhinoceros loves to bathe. At dusk or in the night it approaches the swamp in order to quench its thirst and seizes the opportunity to take a bath and to wallow in the mud, until the sticky mud covers as bigger part if its body as possible. This muddy shell armour-plates the skin of the animal against bites of insects. Rhinoceros wallows in the dust such as horses do.

What does Rhinoceros eat? » 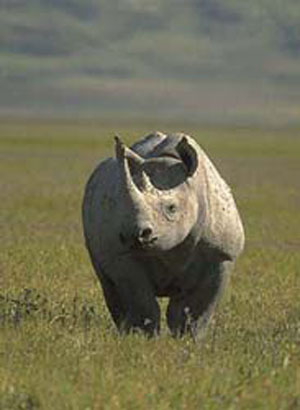