Giraffe live in dry and woody savannas in Africa, south of the desert. Local tribes think that it is a sacred animal. We could say that giraffe is the symbol of the savanna.

Grown-up male giraffe eats leaves of acacia 6 meters up the ground. Its weight is up to 750 kg. Giraffe's is differs from other animals with its long neck - almost 2 meters long. Its body is in red-brown spots seperated by white strips. Its eyes are big with long and thick eyelashes and his head have 2 small horns covered by skin. Giraffes tongue is long about 40 cm.

Giraffes are always upright. Their deep sleep is not longer than 10 minutes. While sleeping their neck is up, and when drink water they open up their front legs. Giraffes can drink 50 litres. While drinking they are vulnerable because can not run away fast. They drink water rarely and when some of them drink water other keep them

Giraffes perceive from a long distance a creeping beast. They prefer to run away but when it is needed they know how to defend from lion's attacks. Only lions are their enemy. Giraffes have murderous kicks. They live in small family groups, that consists of one male, some females and cubs. There are also herds of 40-60 animals. When males fight for leadership of the group they jiggle their head and stroke the opponent head or neck. The weakest step back and the stronger becomes a leader of the herd. Giraffes does not protect their land but every group inhabit area about 50 square km. Giraffes lives about 30 years. 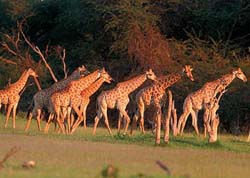