The elephant inhabits the savanna. Today the African elephants number about 300 000 individuals. He is a champion, giant among the animals who live on land, his body lenght reaches 7,5 meters(including the trunk). The height within the shoulder is about 3,3 meters. The weight of the males reaches 7 tons, as for the females 4 tons. His body temperature is 36,5 C. His ears are long 1,2 meters. When he attacks, this giant trots with 30-40 km/h. He has only four giant teeth, every one of it is long at least 0,3 meters and wide 7 cm and has weight of several kg-s. The record is 3,33 meters long and for weight 101,7 kg.

The trunk has many functions. He is very mobile, and has two growths, acting as two parts of a clip. It begins with the merge of his nose with his upper side of his mouth and their extension. With his trunk the elephant catches food and drinks water. The legs of the elephant are like columns. They end with some sort of hoofs.

The duration of life is just like with humans- the oldest reach 80-85 years. The males and females live in different groups. The leader of the female herd is the oldest female. The male herds are les numerous. Up to twelve years old the young elephants follow their mothers. The young elephants fight with each other - they first shake their heads after that they push each other and hit the oponents head with his trunk.

What do elephants eat? » 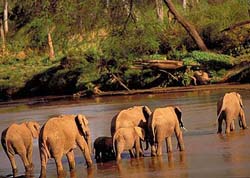