This large poultry had been unknown to the ancient peoples of Asia, Africa and Europe for centuries. It originates from the wild turkey which lives freely in flocks in the deciduous forests in America.

When the Christopher Columbus' seafarers saw the domestic turkeys of the native Indians, they were astonished. The turkeys made their first overseas travel in 1523. Soon after, they were raised as poultry also in Europe. The turkeys were brought to the Balkans about 3 centuries ago.

Even today the domestic turkeys do not differentiate much from their wild relatives which live freely. Some of the bigger breeds of turkeys gain up to 15kg or more. They are also different in colour - white, cream-coloured, reddish, black with metallic shine, silver-gray, as well as colourful.

The eggs of the turkeys are very large – up to 80g. The ordinary non-thoroughbred turkeys lay only 25-50 eggs per year. But there are also turkeys which are good egg layers, which lay up to 100-120 eggs per year.

The baby turkeys are difficult for growing. They are picky eaters, they cannot bear the cold and the wet weather, they cannot stand dewy grass and they easily get flu. That's why the care for their growth is very big.

The female turkey is a very good mother. It incubates also chicken eggs and when they hatch, the turkey raises them as its own.

The turkey cock which is bigger than the female does not take much care of its family. It loves walking proudly because of it beauty. 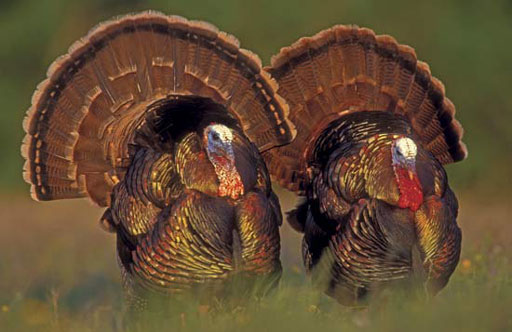