Domestic swine originates from the free-living wild swine. Humans tamed the swine 10 thousand years ago. The first breed swine were too wild and did not differ from their wild relatives.

It is supposed that there were several taming centers in Asia and Europe. Later, the migration of peoples contributed to the combination of the first types breeds domestic swine.

Some of the older breed swine are smaller, for example the "dvine" swine in India. Others are with longer skull and trail (Western European) or with wider and shorter snout (Mediterranean and Asian). All breeds domestic swine crossbreed with each other because they originate from the wild boar, but from different subspecies.

One of the old mixed breed in Bulgaria is "mangalitsa". The swine is small and gain up to 130kg. The swine's hair is yellow-ginger, brown or black.

The female swine give birth to 5-6 piglets. The sows are raised mainly for producing lard. From the sixth month the swine start to gain lard. The meat is with high fat content.

The colourful "dermanska" swine is created by the villagers from village Dermantsi in Lukovit Municipality. It is created through crossbreeding of the local "white" breed and English "berkshir" breed. Its weight is up to 130kg. It is more fertile. It gives birth to 6 up to 12 piglets. The Bulgarian White swine is raised not only for meat, but also for lard.

The male swine or also called boars gain up to 255kg, the females gain less, up to 200kg.

The domestic swine also called pig can be raised in a pasture, as well as in a stall. The domestic pig's meat is very tasty. 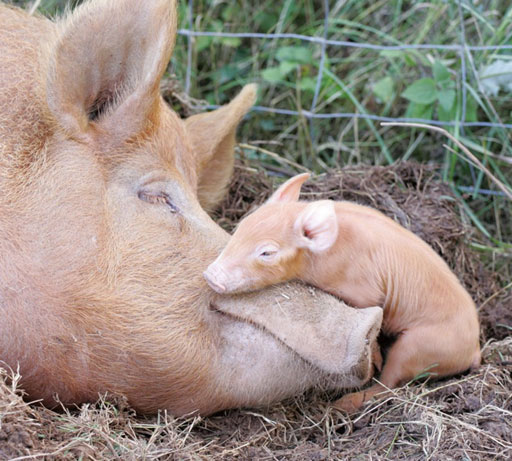