For centuries the horse is man's faithful companion in the work and during war. The importance of the horse has reduced by the mechanization of the labour.

The domestic horses actually are tamed wild horses. The Asian wild horse (Przewalski's horse), which is named after its discoverer who was Russian traveler, has brown-yellow fur. And even today this species is preserved in Mongolia, China and mainly in the Gobi Desert, but their number decreased. They hide during the night, but during the day they walk out to graze.

Another species wild horse is Tarpan with gray colouration, but they have disappeared completely since about 1880.

The horse was tamed 4, 5 thousand years ago during the Bronze Age. The domestic horse was known and used on the continents of the Old World: Asia, Europe, and Africa. The horses are brought over to America from European settlers.

There are different breed horses created by people: draft horses, riding horses, and racing horses. In some countries horses are raised also for their milk and meat. The mare's milk is very rich and healthy. The milk beverage koumiss is prepared from the mare's milk.

The domestic horses' lifespan is from 25 to 50 years. The horses are very smart animals. They attach strongly to their owner.

The smallest horses are the ponies, which are raised in Scotland. Their height is barely 80cm and their weight is about 200kg.

Real giants in comparison to the ponies are the Belgium horses which become 1.80 cm high and their weight is up to 1200kg.

The fastest racing horses are the Arabian, English and Orlov trotters.

Bulgarian most popular breeds Plevenski (Pleven Region) and Eastern-Bulgarian horses have mixed features. They are very tough and not demanding. In the past Bulgaria had been famous with its riders and cavalry which appalled and disturbed anyone who saw it. The flag of the proto-Bulgarians was a horse tail. 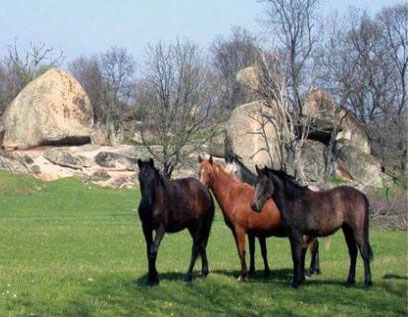