Here and there we still can find the wild grey geese in Bulgaria from which the domestic one originates. Its wild relative makes nests out of old reed and rush stems in the thickest and inaccessible places around the marshes and the lakes. During the autumn a myriad of wild geese from the Nordic Countries migrate to Bulgaria. In mild winters they stay longer on vacation in Bulgaria and then rush to the warmer shores of the Mediterranean Sea.

Have you ever thought why during the winter the domestic geese get fatter? In the wild during the autumn wild geese eat more and gain a lot o fats. The fats serve them as spare fuel when their big and strong wings sweep them across thousands of kilometers over land and water. Exactly this natural feature the man has used and developed their propensity to gain fats in the autumn.

Since when the wild goose has trusted the human and it has become a resident of his yard? It is supposed that this happened nearly at the same time in several different places in Europe and Asia.

The domestic geese are heavier than the wild geese and walk much more clumsily. But of course, it swims well and its feathers are also impregnated (waterproof) with grease which is given off the rump sebaceous gland. If you observe ducks or geese you will see how they spread grease over their feathers as they take it with their beak.

In the marshes and the rivers in the Far East countries lives the black beak goose, which is an ancestor of the domestic goose and it is similar to a swan raised in China and Russia. It has upright walk and upright neck and particularly distinctive is the bump on the main part of its beak.

The domestic geese are different in colouring - grey, white, colourful. There are geese with straight or curly (hanging) feathers. Some of the ducklings are colourful, and others are covered with yellow fluff. While the wild ones lay only 5 - 6 eggs, some well-fed domestic geese lay from 70 up to 100 eggs and one egg weighs up to 150 - 200g. The non-thoroughbred domestic goose weighs only from 3 to 5kg and the well-fed German breed goose may reach over 15kg. 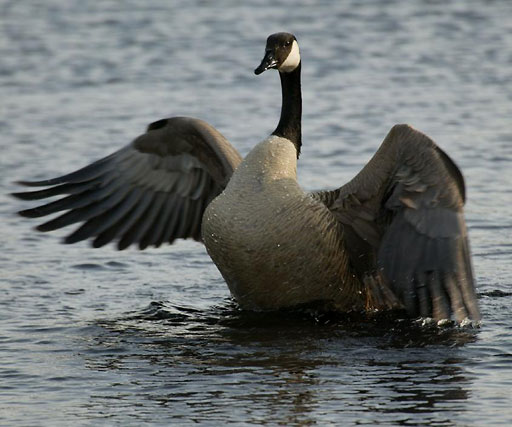