The goat is the poor man's cow. Only rich man had the chance to raise cows and sheep.

The goat is willing to eat almost anything. It eats grass, leaves, and twigs.

The goat is domesticated since ancient times in Southeast Europe and Central Asia. And now in these regions there are wild goats, which climb up to the higher parts of the mountains.

Domestic goats have livelier temper than the sheep, and it has horns on its head. The goats also produce milk and hair.

Domestic goats raised in Bulgaria produce up to 250 - 300lt. milk per year. But there are special breeds like Swiss Saanen goat which is bigger, it doesn't have horns and it is very placid. It produces up to 700lt. milk or even more.

Angora goat from Asia Minor is also famous. The young goats of that breed have long shiny hair. One female goat produces up to 4kg hair, and the male goat (buck) produces almost twice. 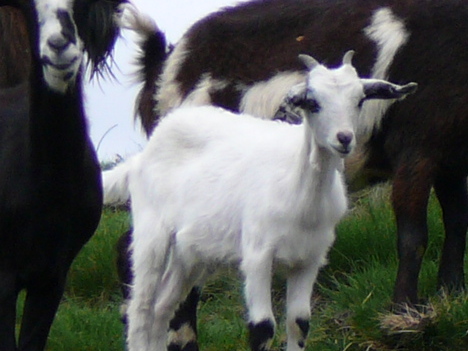