The ordinary duck, especially the non-thoroughbred domestic one is very similar to the wild one in size and colour.

The drake is beautiful - with brown-dark green head, with beautiful white and colourful "mirror" on its wing and spiral curls on the end of the feathers on its tail.

The female duck is only in dark brown colour with darker spots and stripes. This colour hides the duck from the watchful eyes of the enemies. This is particularly important for the duck when it incubates eggs in a hole in the ground amid the lush grass, under a bush, or amid the marsh greenery.

The wild duck is a common bird in the flooded areas around the rivers and around the banks of the marshes and swamps. The ducks can be found in Europe as well as in Asia. It is not known when exactly the wild duck was domesticated. It has been found that there were domestic ducks in ancient Roma. The hunters collected eggs of the wild ducks around the rivers and the marshes and put them in the nests of the domestic hens to incubate them. And in the ancient China there were incubators for artificial incubation of fertile eggs not only of chicks, but also of ducklings. The collected eggs they put in baskets with decaying wood and kept them in warm places.

On the land the duck walks clumsily, but in the water swims excellently. The web that connects the toes of the ducks helps them to swim when they move their feet like paddles.

Some of the domestic breeds of ducks are raised for their meat and others for their eggs. Special breeds for production of meat are Rouen duck (with very large body), Pekin duck (when the duck is 2 months old it reaches 2 kg). Good egg layers are the Japanese ducks (100 eggs per year), Campbell ducks (more than 300 eggs per year).

The meat of the duck is tasty, but the eggs and the meat must be cooked longer than the chicken eggs and meat. The fluff and the plumage of the ducks are highly appreciated not only for filling quilts and pillows, but also for filling sleeping bags.

There are good conditions for growing ducks in Bulgaria, esp. in settlements located near rivers, marshes, dams and fishponds. 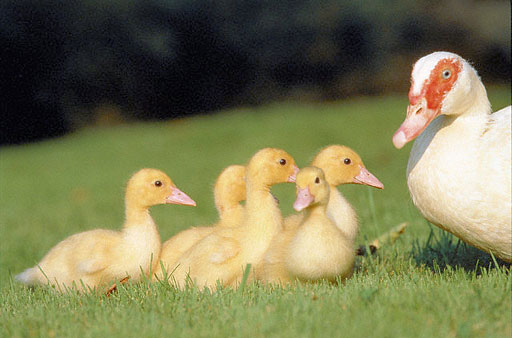