The dog has become a helper and a man's friend before 12-15 thousand years. At first, the dog came closer to the settlements and fed on the leftovers which people threw away near their homes. Little by little it became not only a guard to man's home but also a man's companion during hunting.

Nowadays there are many dog breeds - more than 300. They differentiate between appearance, size and colour. The dogs, however, have kept some features of their wild ancestors - sometimes they look like a wolf, sometimes they resemble a jackal. According to scientists some breeds have derived from the already extinct wild marsh dog. From the wild dogs now we know dingo, which inhabits Australia and its neighbouring islands.

The Northern peoples harness dogs to pull sleighs - such breeds dogs are Eskimo dogs, Greenland dogs and Siberian dogs. Helpers to the shepherds are shepherds dogs. Famous military or borderline guard dogs which are ancestors of the wolves are Dogos. The Bulldogs have especially peculiar appearance with short muzzles and frowning face. Interesting among the hunting dogs are short-legged and long-bodied Dachshunds. The hunters train them to get in the holes of foxes and brocks and to chase them away. Very beautiful with elongated face, long-legged and very slim are the fast hounds, which sweep away towards the fleet-footed game. Famous among the various indoor dogs are the curly poodles, Italian Greyhound and the small Chinese, and long haired Japanese, as well as the Bolognese.

There are two types hunting dogs - beagles, which find game by the trails, follow them and chase it away so the hunter can shoot it, and bird dogs which find game bird and make posture before the bird fly off in order to hint at the hunter so he will be ready to shoot.

Nowadays one of the biggest dogs is St. Bernard which is in danger of extinction. Many lost travelers in the Alps owe their lives to these dogs, because they have rescued them. The Newfoundland dog is very good swimmer.

Nowadays the dog is man's faithful friend. There are dogs almost in every home and also on the streets. It is considered that dogs differentiate only black and white colours and do not differentiate the colours we can see. One dog year is equal to seven human years. The dogs live approximately 10-12 years. Their fertility is very high. Twice per year the female dog can give birth to 3-4 puppies. After they are born puppies are blind, bare and defenceless, they suck milk from their mother, but only a month later they run after their mother. Sometimes the homeless dogs which wander in packs can be dangerous for people, especially during the winter. 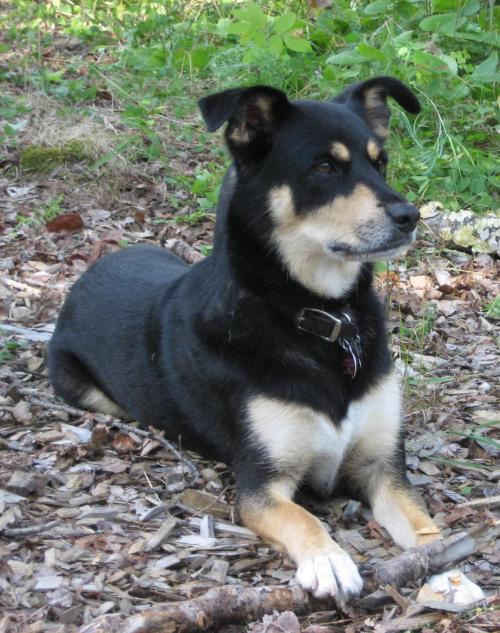