The cats inhabit the Earth for almost 35 million years. The caressing pussycat until today has wild and evil relative, which lives in the European forests - this is the wild cat. It is bigger, with thicker, fuzzy tail with a black ring-like stripe and it has longer whiskers. The Bulgarian wild cat is brown coal with darker stripes. Despite that the wild cat easy crossbreeds with the domestic cats, it is not their ancestor. The domestication of the cat has happened in ancient Egypt from the wild Nubian cat. Although it lives near the marshes it is an enemy for the rodents and its quality was valued from the Egypt farmers. In the European countries the domestic cat came after the first century.

In ancient Egypt cats were thought to be defenders of the hearth and home, they were worshipped as sacred animals. The killing of a cat was punishable with a death sentence.

Today's domestic cats differentiate between colour and stripes from their wild close relatives. Some of them are in one colour: white, rusty, cream-coloured, grey, shiny black, etc. Others are colourful – with stripes, with large patterns or spotted. There are many different breeds of domestic cats. Among the thoroughbred the most famous are the Angora or Persian cats with long soft fur and fluffy tails. The Siamese cats have short fur and they are taller with longer legs, black forehead and expressive sky-blue eyes. Also very interesting is the Manx cat which is born without a tale.

The cat is homebody - it loves its home and it is attached to it. The cat can recognise when its owner returns home when he/she is still climbing the stairs and the cat stares at the door and awaits him/her to open. Then the cat welcomes its owner with a lifted tail, quiet meowing and rubbing in his/her legs.

In the morning cats get up early and in the afternoon they lounge. The cats are clever hunters which prowl birds, mice and other small animals, but at home they count on their owner for food. The cat gives birth to 2 up to 7 small blind kittens. Their mother loves them so much. While playing with them, their mother gradually trains them to prowl and catch their quarry. The cats' lifespan is from 12 up to 15 years. The cat is more of a pet, rather than useful domestic animal. 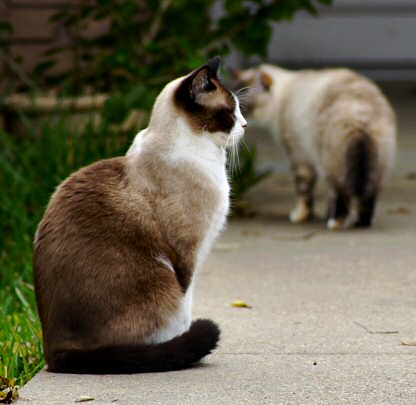