Domestic buffalo originates from the wild buffalo which lives in India and can be found even today in the jungle around rivers and marshes. Wild relatives of the domestic buffalo can be found also in South Asia and Africa. Buffaloes usually graze during the night and before dawn and after sunrise they set off to the water and stay in till sunset.

The male buffalo is very cautious and irritable and you may expect anything from it. This still wild temper of the buffaloes is the reason why they are hard to be raised in livestock farms.

The domestic buffalo is black, but there are also white buffaloes - their fur instead of black pigment contains air, consequently the furs look white. The buffaloes are ruminant herbivorous animals and they are pretty big. In the past they were harnessed to haul loads and to plough fields. Nowadays their power is substituted for the mechanical power.

The domestic buffaloes are still useful for people even today. The female buffalo's milk is richer and its fat content is almost twice more than the cow milk. The average milk production by a non-thoroughbred female buffalo (also called cow) is up to 700-800 lt. delicious milk per year. To raise a female buffalo is cheaper than raising a cow, because female buffalo is not picky in regard to food. It feed on the food which the cow doesn't eat: cornstalk, stubs, sunflower cakes, foliage, as well as trashy hay.

The baby buffalo (also called calf) grows up fast after turning 1 year and when it turns 6-7 years it is as big as its parents. The buffalo's skin is very tough that's why the transmission thongs made of buffalo's skin are preferred.

The meat of the young buffalo is very tasty and healthier because it contains more proteins, iron, phosphorus, and the rich full fat milk is distinguished with high calorific value. 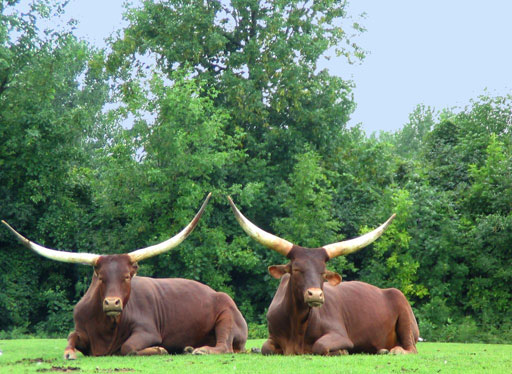